Was there any other way to celebrate Sebastian Vettel’s glorious win? The Singapore Grand Prix saved the best for the last with Bon Jovi taking the stage on the third night to a whooping 60,000 fans. Young, old or just right in the middle, there was no one who was not a fan, no one who had no heard of their classics. It made for the best night of the year as they proved to the world why they are hailed as bona fide rock legends!

Crooning in with baby, baby, baby, he greeted the Padang with “That’s What The Water Made Me” with lead guitarist Phil X getting the spotlight with his mad skills. This pumped the crowd up, but nothing beat the screams that welcomed “You Give Love A Bad Name”. Nothing could save the crowd from this point, and Jon Bon Jovi was loving it. The entire Padang got into the song, and sang word for word with the legend. 30 years on, and they have still got it!

Neither the heat nor his tight leather pants could stop his energy that night. “Raise Your Hand” and “Because We Can” came after, and you know it was good when the crowd of iPhone screens and Go-Pros disappeared to the way it should have always been. The real treat came in “Bad Medicine”. Jon Bon Jovi got off stage. He got off the stage and walked among the crowd! Jealously got to a whole new level as Phil X stunned the crowd again with his solo as some fans took the chance to grab a couple of selfies.

This man loves his fans as much as we adore him. You cannot say that you have been a rock concert, until you have went to Bon Jovi and had over 60,000 people around you singing capella to his iconic “It’s My Life” and “Wanted Dead or Alive”. They came a long way from America and we’ll sleep when we are dead.

If I were to list out the highlights of the show, it would never end. But, the one moment to remember was definitely the encore. Fans noticed something was missing. A particular track was still not heard! They got right into it, switching from chants of “We want more!” to singing capella to “Living On The Prayer”.

And, in true Bon Jovi sense, they came right back out. This time, Jon Bon Jovi came out in a sleeveless number, but still rocking those tight leathers (how is he doing that?)! He teased the crowd with “Runaway” and pumped up what’s left of our energy with “Have A Nice Day”. Then, the moment came. He started off with an acoustic opening to what everyone has been waiting for all night; “Living On A Prayer.” For love, for love. The rest of the band joined in. We wanted it and we got it, and we thanked him with everything we have got. I swore the moon could have heard the Padang singing along.

The night had to end, and the crowd thanked the legends with another round of “Whoa! Livin on a Prayer”. This is what a rock concert is about. This is what Bon Jovi is about.

Check out the other photos from our Flickr album below: 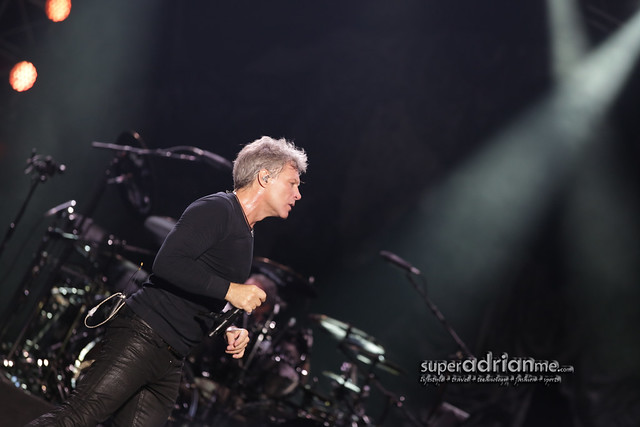